Last week, WotC put out a new Unearthed Arcana detailing Giant Options. Three subclasses, and a slew of giant-themed feats. We’re talking about it soon on the pocast, so don’t worry.

Heads have been scratched all over the the TTRPG space since this thing came out. It doesn’t seem to fit in any of the releases that have been talked about. Plus they are so close to publication that there wouldn’t be a UA about them at this point. Anything that we know about has already been through playtesting, so it’s not Spelljammer or Dragonlance. What the heck could it be?

Well, friends, I have guess. It is thoroughly uninformed but based on pretty solid circumstantial evidence. So here goes.

Let me start with the strongest evidence, I think. We can look to the previous year’s UA for a clue on when things are in development and when they are expected to release. What came out about a year ago? The Mages of Strixhaven UA that heralded another port from Magic: the Gathering. Like Theros and Ravnica before it, Strixhaven was incredibly popular (we talked about it here: Episode 52 – Strixhaven comes from MtG to DnD). So I bet they are looking at other M:tG settings to bring over.

And, if we look, there is a setting that has multiple tribes of giants. They are largely nomadic, but one of the tribes in particular is druidic and known for hunting very large game. This setting also heavily features runes, the entire landscape is filled with large, floating, polyhedron-shaped stones that are covered with runes.

So my guess? I think that underneath nerdy Christmas trees are going to be a bunch of Zendikar books.

What do you think?

Check out our Fully Funded Kickstarter 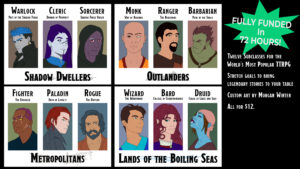